The wait is over. After more than a decade of planning and a year of COVID-19 safety concerns, residents can tour Oklahoma City’s new $288 million, 500,000 square foot convention center that was built debt-free as a part of the City’s celebrated MAPS 3 program.

Self-guided, timed, socially-distanced free public tours will be available by reservation only between 9 a.m. and 4 p.m. on Saturday, March 13. Up to 50 people will be allowed to sign up for each 15-minute time slot. Temperature checks and masks are required for entry. Sign up for tours at http://okccctour.register110.com.

The Convention Center is located at 100 Mick Cornett Drive in downtown Oklahoma City.

“People have been clamoring to tour the Convention Center for more than a year,” said MAPS 3 Program Manager David Todd. ”We are thrilled to let the public see what they built through MAPS 3. I think they will be surprised with what we have now in Oklahoma City. The building is an architectural gem.”

Tours will take about 20 minutes and start in the Convention Center’s atrium where one of the City’s newest and most valuable art pieces, Virtual Sky, is suspended from the ceiling. Virtual Sky is made of anodized titanium rods suspended on aircraft cable alternating with strands of colorful LED lights.

The building is already hosting events that bring attendees from around the region and world. It will provide a boost to Oklahoma City’s economy and serve as an ideal venue for local events.

“The Convention Center is the largest single MAPS project ever and promises to bring a long-term economic impact worthy of that investment,” said Mayor David Holt. “It’s the linchpin to what is now the finest meeting destination in the country for a City our size. The synergy is unparalleled between the Convention Center, Scissortail Park, the Omni Oklahoma City Hotel, Chesapeake Energy Arena and the OKC Streetcar that links it all to Bricktown and the rest of downtown.”

The Convention Center is managed by ASM Global, the same company that manages Chesapeake Energy Arena and former Cox Convention Center building. It is next door to the recently opened Omni Oklahoma City Hotel. 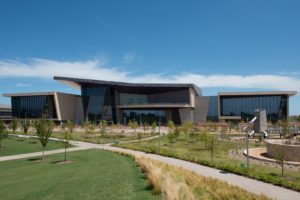 11 Black Urbanists Every Planner Should Know